He Will Judge the World in Righteousness

For the Father judges no one, but he has given all judgment to the Son,  that all may honor the Son, even as they honor the Father. He who doesn’t honor the Son doesn’t honor the Father who sent him.  “Most certainly I tell you, he who hears my word, and believes him who sent me, has eternal life, and doesn’t come into judgment, but has passed out of death into life.  Most certainly, I tell you, the hour comes, and now is, when the dead will hear the Son of God’s voice; and those who hear will live.  For as the Father has life in himself, even so he gave to the Son also to have life in himself.  He also gave him authority to execute judgment, because he is a son of man.  Don’t marvel at this, for the hour comes, in which all that are in the tombs will hear his voice,  and will come out; those who have done good, to the resurrection of life; and those who have done evil, to the resurrection of judgment. I can of myself do nothing. As I hear, I judge, and my judgment is righteous; because I don’t seek my own will, but the will of my Father who sent me. John 5:22-30

Jesus said, “I came into this world for judgment, that those who don’t see may see; and that those who see may become blind.”  Those of the Pharisees who were with him heard these things, and said to him, “Are we also blind?” Jesus said to them, “If you were blind, you would have no sin; but now you say, ‘We see.’ Therefore your sin remains.  John 9:39-41

For God so loved the world, that he gave his one and only Son, that whoever believes in him should not perish, but have eternal life.  For God didn’t send his Son into the world to judge the world, but that the world should be saved through him.  He who believes in him is not judged. He who doesn’t believe has been judged already, because he has not believed in the name of the one and only Son of God. This is the judgment, that the light has come into the world, and men loved the darkness rather than the light; for their works were evil.  For everyone who does evil hates the light, and doesn’t come to the light, lest his works would be exposed.   But he who does the truth comes to the light, that his works may be revealed, that they have been done in God.” John 3:16-21

For Christ hasn’t entered into holy places made with hands, which are representations of the true, but into heaven itself, now to appear in the presence of God for us; nor yet that he should offer himself often, as the high priest enters into the holy place year by year with blood not his own, or else he must have suffered often since the foundation of the world. But now once at the end of the ages, he has been revealed to put away sin by the sacrifice of himself.  Inasmuch as it is appointed for men to die once, and after this, judgment, so Christ also, having been offered once to bear the sins of many, will appear a second time, without sin, to those who are eagerly waiting for him for salvation.  Hebrews 9:24-28

The times of ignorance therefore God overlooked. But now he commands that all people everywhere should repent, because he has appointed a day in which he will judge the world in righteousness by the man whom he has ordained; of which he has given assurance to all men, in that he has raised him from the dead.”  Acts 17:30,31

I have fought the good fight. I have finished the course. I have kept the faith. From now on, there is stored up for me the crown of righteousness, which the Lord, the righteous judge, will give to me on that day; and not to me only, but also to all those who have loved his appearing.  2 Timothy 4:7,8 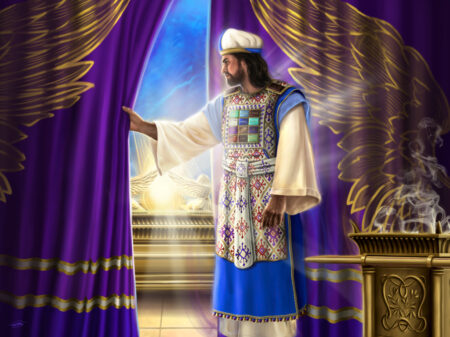 Having then a great high priest, who has passed through the heavens, Jesus, the Son of God, let’s hold tightly to our confession.  For we don’t have a high priest who can’t be touched with the feeling of our infirmities, but one who has been in all points tempted like we are, yet without sin.  Let’s therefore draw near with boldness to the throne of grace, that we may receive mercy, and may find grace for help in time of need.  Hebrews 4:14-16

Therefore he was obligated in all things to be made like his brothers, that he might become a merciful and faithful high priest in things pertaining to God, to make atonement for the sins of the people. For in that he himself has suffered being tempted, he is able to help those who are tempted. Hebrews 2:17,18

He will Judge the World In Righteousness

I said in my heart, “God will judge the righteous and the wicked; for there is a time there for every purpose and for every work.”  Ecclesiastes 3:17

For Yahweh will judge his people, and have compassion on his servants. Psalms 135:14

This is the end of the matter. All has been heard. Fear God, and keep his commandments; for this is the whole duty of man. For God will bring every work into judgment, with every hidden thing, whether it is good, or whether it is evil.  Ecclesiastes 12:13,14

Which is a manifest token of the righteous judgment of God, that ye may be counted worthy of the kingdom of God, for which ye also suffer:  Seeing it is a righteous thing with God to recompense tribulation to them that trouble you; And to you who are troubled rest with us, when the Lord Jesus shall be revealed from heaven with his mighty angels, In flaming fire taking vengeance on them that know not God, and that obey not the gospel of our Lord Jesus Christ:  Who shall be punished with everlasting destruction from the presence of the Lord, and from the glory of his power;   When he shall come to be glorified in his saints, and to be admired in all them that believe (because our testimony among you was believed) in that day. Wherefore also we pray always for you, that our God would count you worthy of this calling, and fulfil all the good pleasure of his goodness, and the work of faith with power:  That the name of our Lord Jesus Christ may be glorified in you, and ye in him, according to the grace of our God and the Lord Jesus Christ. 2 Thessalonians 1:5-12

I saw the heaven opened, and behold, a white horse, and he who sat on it is called Faithful and True. In righteousness he judges and makes war.  His eyes are a flame of fire, and on his head are many crowns. He has names written and a name written which no one knows but he himself.  He is clothed in a garment sprinkled with blood. His name is called “The Word of God.”  The armies which are in heaven followed him on white horses, clothed in white, pure, fine linen. Out of his mouth proceeds a sharp, double-edged sword, that with it he should strike the nations. He will rule them with an iron rod. He treads the wine press of the fierceness of the wrath of God, the Almighty.  He has on his garment and on his thigh a name written, “KING OF KINGS, AND LORD OF LORDS.” Revelation 19:11-16

For you have not come to a mountain that might be touched, and that burned with fire, and to blackness, darkness, storm, the sound of a trumpet, and the voice of words; which those who heard it begged that not one more word should be spoken to them, for they could not stand that which was commanded, “If even an animal touches the mountain, it shall be stoned”; and so fearful was the appearance that Moses said, “I am terrified and trembling.”  But you have come to Mount Zion, and to the city of the living God, the heavenly Jerusalem, and to innumerable multitudes of angels, to the festal gathering and assembly of the firstborn who are enrolled in heaven, to God the Judge of all, to the spirits of just men made perfect, to Jesus, the mediator of a new covenant, and to the blood of sprinkling that speaks better than that of Abel.   See that you don’t refuse him who speaks. For if they didn’t escape when they refused him who warned on the earth, how much more will we not escape who turn away from him who warns from heaven, whose voice shook the earth then, but now he has promised, saying, “Yet once more I will shake not only the earth, but also the heavens.”  This phrase, “Yet once more”, signifies the removing of those things that are shaken, as of things that have been made, that those things which are not shaken may remain.  Therefore, receiving a Kingdom that can’t be shaken, let’s have grace, through which we serve God acceptably, with reverence and awe, for our God is a consuming fire. Hebrews 12:18-29

I will give them in my house and within my walls a memorial and a name better than of sons and of daughters. I will give them an everlasting name, that will not be cut off.  Also the foreigners who join themselves to Yahweh, to serve him, and to love Yahweh’s name, to be his servants, everyone who keeps the Sabbath from profaning it, and holds fast my covenant; I will bring these to my holy mountain, and make them joyful in my house of prayer. Their burnt offerings and their sacrifices will be accepted on my altar; for my house will be called a house of prayer for all peoples.”  The Lord Yahweh, who gathers the outcasts of Israel, says, “I will yet gather others to him, in addition to his own who are gathered.”  Isaiah 56:5-8

Andrews, J.N.  The Judgment. Its Events and their Order