The heavens, the earth, and all their vast array were finished.  On the seventh day God finished his work which he had done; and he rested on the seventh day from all his work which he had done.  God blessed the seventh day, and made it holy, because he rested in it from all his work of creation which he had done.   This is the history of the generations of the heavens and of the earth when they were created, in the day that Yahweh God made the earth and the heavens.  No plant of the field was yet in the earth, and no herb of the field had yet sprung up; for Yahweh God had not caused it to rain on the earth. There was not a man to till the ground, but a mist went up from the earth, and watered the whole surface of the ground. Yahweh God formed man from the dust of the ground, and breathed into his nostrils the breath of life; and man became a living soul.  Yahweh God planted a garden eastward, in Eden, and there he put the man whom he had formed.  Out of the ground Yahweh God made every tree to grow that is pleasant to the sight, and good for food, including the tree of life in the middle of the garden and the tree of the knowledge of good and evil.   A river went out of Eden to water the garden; and from there it was parted, and became the source of four rivers.  The name of the first is Pishon: it flows through the whole land of Havilah, where there is gold; and the gold of that land is good. Bdellium and onyx stone are also there.  The name of the second river is Gihon. It is the same river that flows through the whole land of Cush.  The name of the third river is Hiddekel. This is the one which flows in front of Assyria. The fourth river is the Euphrates.  Yahweh God took the man, and put him into the garden of Eden to cultivate and keep it.  Genesis 2:1-15 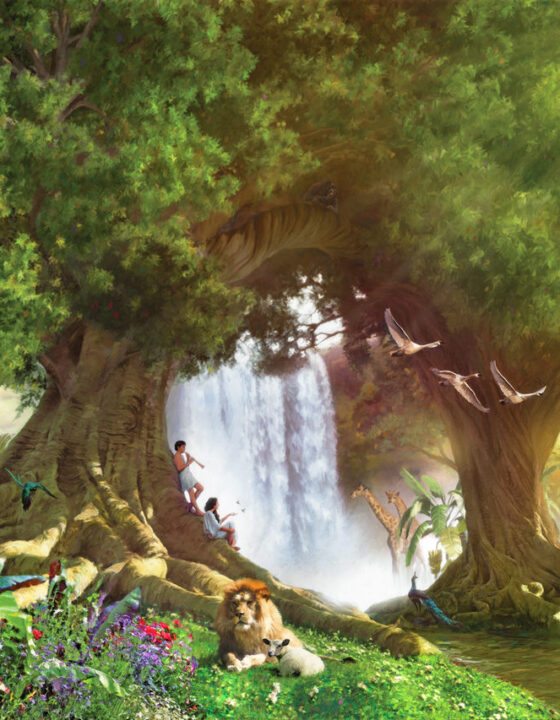 According to all that Yahweh commanded Moses, so the children of Israel did all the work.  Moses saw all the work, and behold, they had done it as Yahweh had commanded, even so had they done it: and Moses blessed them.  Exodus 39:42,43

Moses did so. According to all that Yahweh commanded him, so he did.  In the first month in the second year, on the first day of the month, the tabernacle was raised up.  Exodus 40:16,17 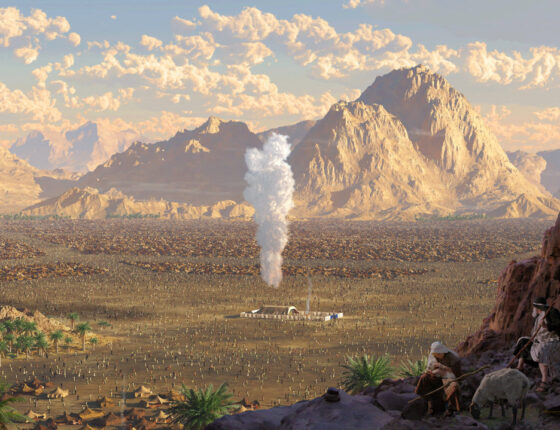 God’s Spirit was hovering over

Yahweh God planted a garden eastward, in Eden, and there he put the man whom he had formed.  Genesis 2:8  So he drove out the man; and he placed cherubim at the east of the garden of Eden, and a flaming sword which turned every way, to guard the way to the tree of life.  Genesis 3:24

Covenant of the Creator

“Worthy are you, our Lord and God, the Holy One, to receive the glory, the honor, and the power, for you created all things, and because of your desire they existed, and were created!”  Revelation 4:11 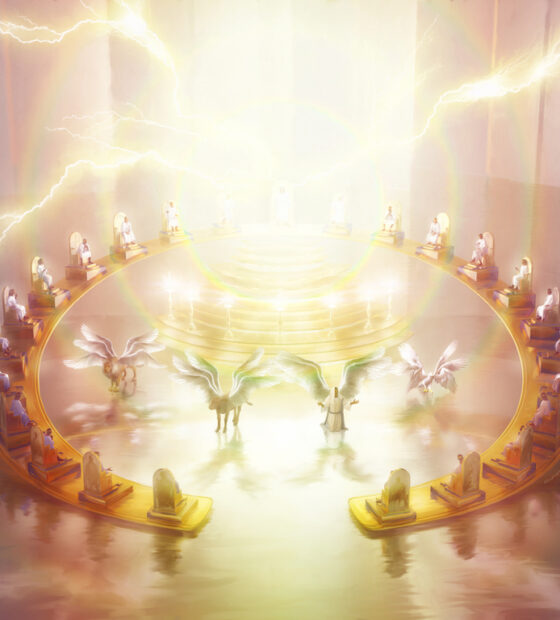 You are Yahweh, even you alone. You have made heaven, the heaven of heavens, with all their army, the earth and all things that are on it, the seas and all that is in them, and you preserve them all. The army of heaven worships you.  Nehemiah 9:6 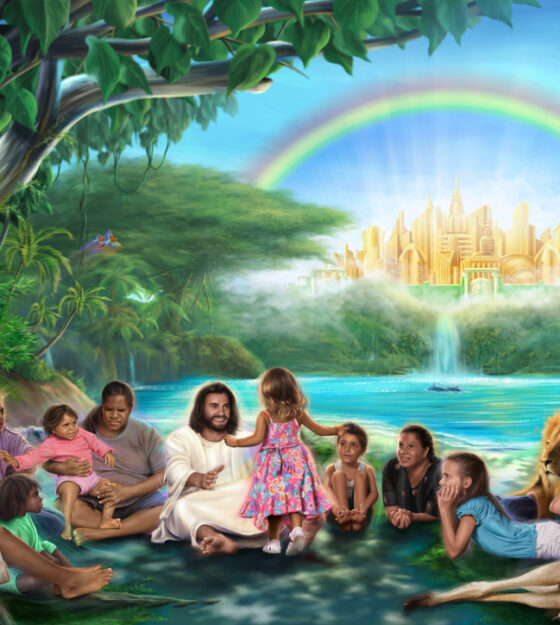 He is our God

Oh come, let’s sing to Yahweh. Let’s shout aloud to the rock of our salvation!  Let’s come before his presence with thanksgiving. Let’s extol him with songs!  For Yahweh is a great God, a great King above all gods.  In his hand are the deep places of the earth. The heights of the mountains are also his.  The sea is his, and he made it. His hands formed the dry land. Oh come, let’s worship and bow down. Let’s kneel before Yahweh, our Maker, for he is our God. We are the people of his pasture, and the sheep in his care. Today, oh that you would hear his voice!  Psalms 95:1-7

And Adam knew his wife again; and she bare a son, and called his name Seth: For God, said she, hath appointed me another seed instead of Abel, whom Cain slew.  Genesis 4:25

And when thy days be fulfilled, and thou shalt sleep with thy fathers, I will set up thy seed after thee, which shall proceed out of thy bowels, and I will establish his kingdom.  He shall build an house for my name, and I will stablish the throne of his kingdom for ever.  2 Samuel 7:12,13

Now to Abraham and his seed were the promises made. He saith not, And to seeds, as of many; but as of one, And to thy seed, which is Christ. Galatians 3:16

The LORD said unto my Lord, Sit thou at my right hand, until I make thine enemies thy footstool. The LORD shall send the rod of thy strength out of Zion: rule thou in the midst of thine enemies. Thy people shall be willing in the day of thy power, in the beauties of holiness from the womb of the morning: thou hast the dew of thy youth. The LORD hath sworn, and will not repent, Thou art a priest for ever after the order of Melchizedek. The Lord at thy right hand shall strike through kings in the day of his wrath. He shall judge among the heathen, he shall fill the places with the dead bodies; he shall wound the heads over many countries. He shall drink of the brook in the way: therefore shall he lift up the head. Psalm 110 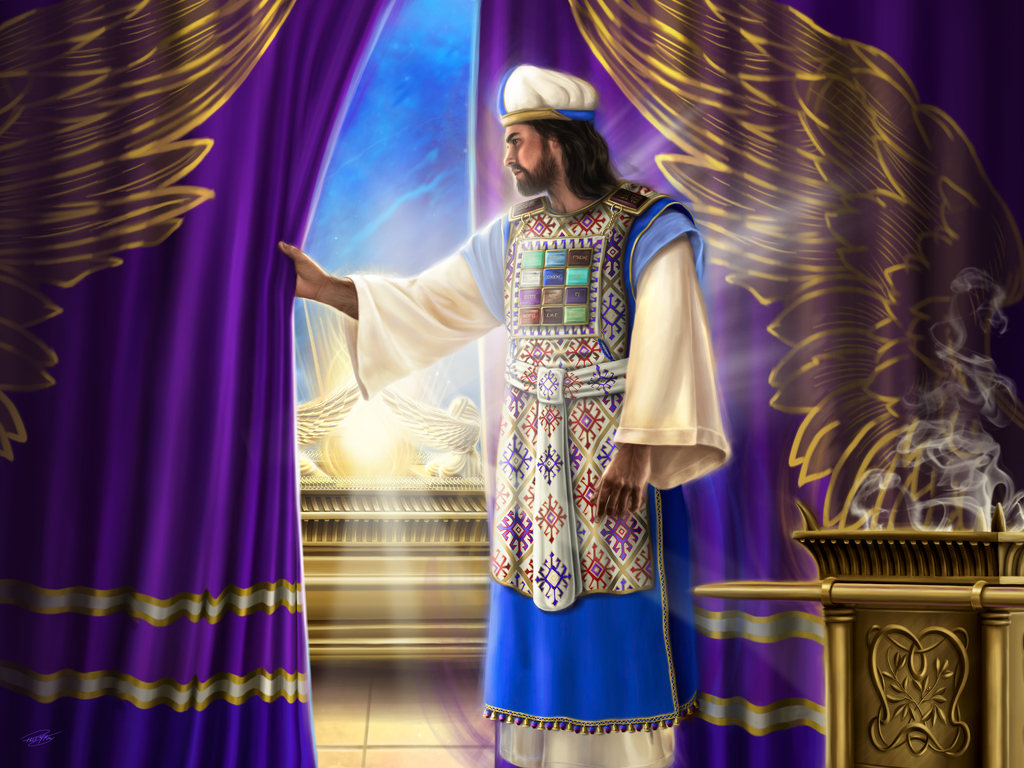 Forasmuch then as the children are partakers of flesh and blood, he also himself likewise took part of the same; that through death he might destroy him that had the power of death, that is, the devil;  And deliver them who through fear of death were all their lifetime subject to bondage. For verily he took not on him the nature of angels; but he took on him the seed of Abraham. Wherefore in all things it behoved him to be made like unto his brethren, that he might be a merciful and faithful high priest in things pertaining to God, to make reconciliation for the sins of the people.  For in that he himself hath suffered being tempted, he is able to succour them that are tempted.  Hebrews 2:14-18 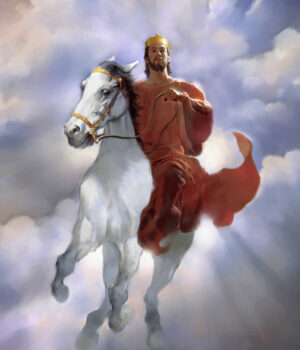 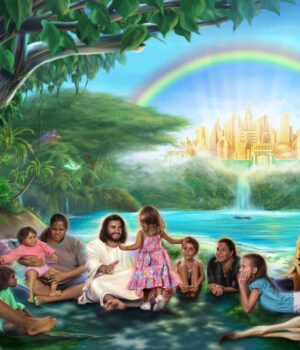 And there was war in heaven: Michael and his angels fought against the dragon; and the dragon fought and his angels,  And prevailed not; neither was their place found any more in heaven.  And the great dragon was cast out, that old serpent, called the Devil, and Satan, which deceiveth the whole world: he was cast out into the earth, and his angels were cast out with him.  And I heard a loud voice saying in heaven, Now is come salvation, and strength, and the kingdom of our God, and the power of his Christ: for the accuser of our brethren is cast down, which accused them before our God day and night.  And they overcame him by the blood of the Lamb, and by the word of their testimony; and they loved not their lives unto the death.  Revelation 12:7-11

And the God of peace shall bruise Satan under your feet shortly. The grace of our Lord Jesus Christ be with you. Amen. Romans 16:20

….the book of life of the Lamb slain from the foundation of the world. Revelation 13:8b

Their eyes were opened, and they both knew that they were naked. They sewed fig leaves together, and made coverings for themselves.  They heard Yahweh God’s voice walking in the garden in the cool of the day, and the man and his wife hid themselves from the presence of Yahweh God among the trees of the garden.  Yahweh God called to the man, and said to him, “Where are you?”  The man said, “I heard your voice in the garden, and I was afraid, because I was naked; and I hid myself.”  God said, “Who told you that you were naked? Have you eaten from the tree that I commanded you not to eat from?”  Genesis 3:7-11

“Behold, I come like a thief. Blessed is he who watches, and keeps his clothes, so that he doesn’t walk naked, and they see his shame.”  Revelation 16:15

Unto Adam also and to his wife did the LORD God make coats of skins, and clothed them.  And the LORD God said, Behold, the man is become as one of us, to know good and evil: and now, lest he put forth his hand, and take also of the tree of life, and eat, and live for ever:  Therefore the LORD God sent him forth from the garden of Eden, to till the ground from whence he was taken.  So he drove out the man; and he placed at the east of the garden of Eden Cherubims, and a flaming sword which turned every way, to keep the way of the tree of life. Genesis 3:21-24

Again she gave birth, to Cain’s brother Abel. Abel was a keeper of sheep, but Cain was a tiller of the ground. As time passed, Cain brought an offering to Yahweh from the fruit of the ground.  Abel also brought some of the firstborn of his flock and of its fat. Yahweh respected Abel and his offering,  but he didn’t respect Cain and his offering. Cain was very angry, and the expression on his face fell.  Yahweh said to Cain, “Why are you angry? Why has the expression of your face fallen?   If you do well, won’t it be lifted up? If you don’t do well, sin crouches at the door. Its desire is for you, but you are to rule over it.”  Cain said to Abel, his brother, “Let’s go into the field.” While they were in the field, Cain rose up against Abel, his brother, and killed him. Yahweh said to Cain, “Where is Abel, your brother?” He said, “I don’t know. Am I my brother’s keeper?”  Yahweh said, “What have you done? The voice of your brother’s blood cries to me from the ground.  Now you are cursed because of the ground, which has opened its mouth to receive your brother’s blood from your hand.  From now on, when you till the ground, it won’t yield its strength to you. You will be a fugitive and a wanderer in the earth.”  Cain said to Yahweh, “My punishment is greater than I can bear.  Behold, you have driven me out today from the surface of the ground. I will be hidden from your face, and I will be a fugitive and a wanderer in the earth. Whoever finds me will kill me.”  Yahweh said to him, “Therefore whoever slays Cain, vengeance will be taken on him sevenfold.” Yahweh appointed a sign for Cain, so that anyone finding him would not strike him.  Cain left Yahweh’s presence, and lived in the land of Nod, east of Eden. Genesis 4:2-16